Trinity’s Blessing of the Animals In Honor of St. Francis of Assisi Is Sunday, October 4th, 10 AM 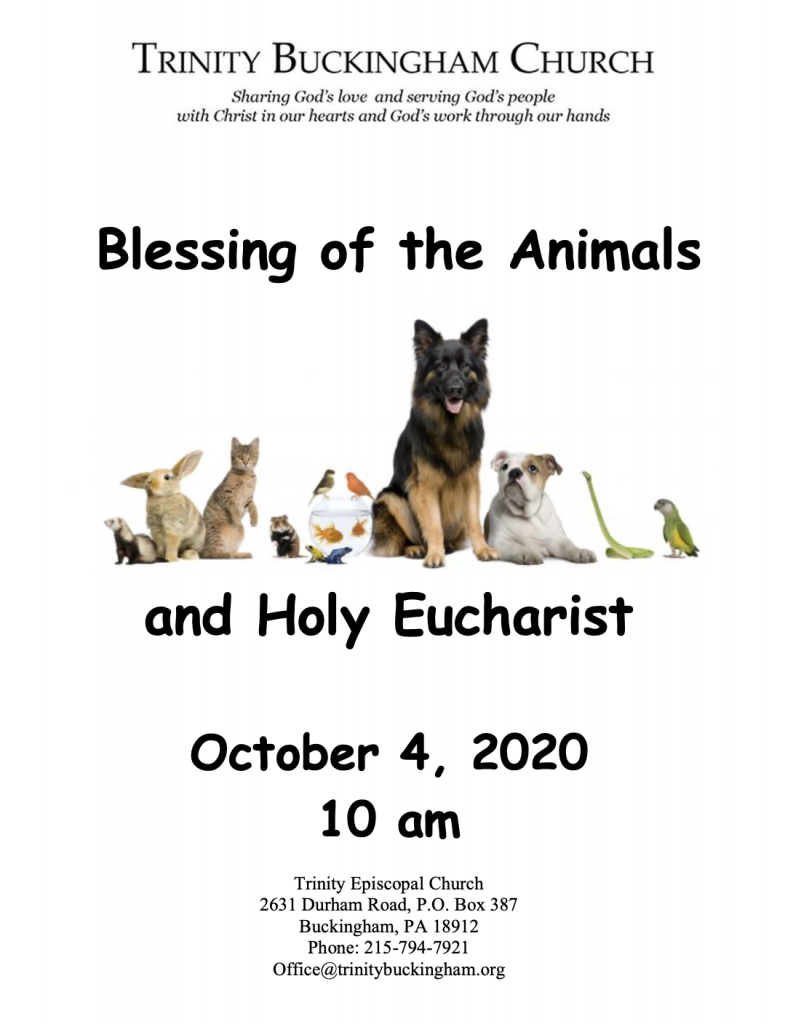 Bring the animals who share your life (real or stuffed!) to honor St. Francis of Assisi at Trinity’s Children of All Ages service, a service for the young and young at heart.

During this time of coronavirus restrictions, Trinity’s Children of All Ages Worship Service gathes outside in the parking lot next to the Labyrinth. Please wear masks and bring a chair if you would like to sit during the service.

Due to restrictions on the number of people permitted in both spaces, reservations must be made by emailing the Church Office at office@trinitybuckingham.org or by calling the Office at 215-794-792.

Some (wiki!) background on St. Francis —

St. Francis believed that nature itself was the mirror of God. He called all creatures his “brothers” and “sisters,” and even preached to the birds and was said to have persuaded a wolf to stop attacking some locals if they agreed to feed the wolf. In his “Canticle of the Creatures” (“Praises of Creatures” or “Canticle of the Sun”), he mentioned the “Brother Sun” and “Sister Moon”, the wind and water, and “Sister Death” and referred to his chronic illnesses as his “sisters.”

Francis’ visit to Egypt and attempted rapprochement with the Muslim world had far-reaching consequences, long past his own death. After the fall of the Crusader Kingdom, the Franciscans, of all Catholics, were allowed to stay on in the Holy Land and be recognized as “Custodians of the Holy Land” on behalf of the Catholic Church.

Francis preached preached to man and beast the universal ability and duty of all creatures to praise God (a common theme in the Psalms) and the duty of men to protect and enjoy nature as both the stewards of God’s creation and as creatures ourselves. On November 29, 1979, Pope John Paul II declared St. Francis the Patron Saint of Ecology. Many of the stories that surround the life of St. Francis say that he had a great love for animals and the environment.

One well-know incident illustrating the Saint’s humility towards nature is recounted in the “Fioretti” (“Little Flowers”), a collection of legends and folklore that sprang up after the Saint’s death. It is said that, one day, while Francis was traveling with some companions, they happened upon a place in the road where birds filled the trees on either side. Francis told his companions to “wait for me while I go to preach to my sisters the birds.” The birds surrounded him, intrigued by the power of his voice, and not one of them flew away. He is often portrayed with a bird, typically in his hand.