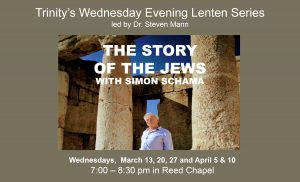 Professor Schama presents a five-part documentary exploring the Jewish experience from ancient times to the present day.   Presenting historical scholarship and his own family history, he takes viewers on a journey through the Biblical past to today’s challenges.

The Story of the Jews is a moving exploration of the distinctiveness and difference, separation and isolation, tolerance and prejudice that is the history of Jewish life. But, it is also the celebration of the highest human spiritual and intellectual aspirations reflected in Jewish thought, Jewish imagination, Jewish creativity, and Jewish achievement, which have transformed the world we live in. The Christian imagination should embrace the profound meaning that 2,000 years ago God chose to deliver Jesus to the world as a Jew.

Come join us to view and discuss this sobering yet uplifting documentary. Discussion will be moderated by Dr. Steven W. Mann.

Dr. Mann received a Ph.D. from in Pharmaceutical Science from the University of Rhode Island and is a graduate of Princeton Theological Seminary’s Science for Ministry Institute, a three-year program funded by Templeton Foundation to “further the development of a more informed approach to the tensions between science and faith.” Dr. Mann is a member of Trinity Buckingham Church.